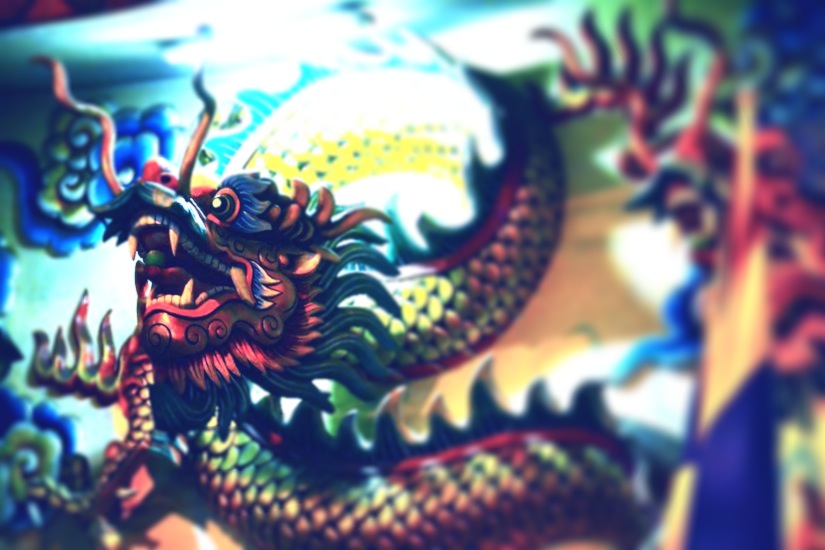 Within alchemical language the spiritual energies of the Heart and Kidneys are known respectively as the energies of Li and Kan. These are the two trigrams known as Fire and Water within the Yi Jing (I Ching). Li is formed from two solid lines with a broken Yin line within its centre; Kan is the opposite of Li and formed from two broken Yin lines surrounding a solid Yang line. These two symbols are shown in the image below: These are two of key Gua or ‘sacred symbols’ from the Yi Jing. 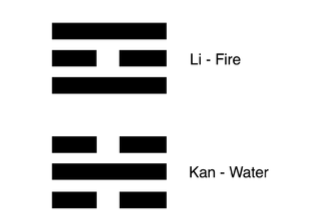 Li and Kan – Fire and Water

Within Qi Gong and Nei Gong practices, the merging of Fire and Water refers to bringing the Qi of the Heart and Kidneys into such a state whereby they can communicate with each other. Here there is an alchemical reaction between the two of them whereby the excitable function of the Heart’s energy balances the more reserved energy of the Kidneys. This takes place on an energetic level and is accompanied by tangible sensations of Qi flow within the torso which generate distinct reactions within the body.

The alchemical interaction of Fire and Water through Daoist meditative practices takes a slightly different form as here we are discussing the mental/spiritual/psyche aspects of the Heart and Kidneys rather than their energy. In this case we are discussing the difference between the acquired mind and the congenital mind and the imbalances that have caused our consciousness to divide into two halves in the first place. Here the trigrams of Li and Kan can be discussed as follows.

Li has two Yang lines on the outside representing the virtuous nature of wisdom. Unfortunately, at the centre of these two lines sits a single broken Yin line representing the biases and acquired knowledge which is getting in the way of accessing or trusting our inherent wisdom.

Kan has two broken Yin lines representing mundane thoughts and trivial attachments. They are surrounding a single solid Yang line that represents intuitive understanding of the nature of reality. We could access this intuitive knowledge (and indeed many people do on occasion) if only we could dig it out of the mundane thoughts which are burying it.

Philosophically Fire is said to rise and Water to sink within the body. Since Fire sits above, at the level of the Heart it is inevitable that it will blaze upwards, mostly fuelled by our emotional states, which cause it to move away from the Water energy which it needs to mix with. Water sinks downwards represented by the wastage of our essence which we do not adequately preserve throughout our lives. This causes it to move away from the Hearts energy and in this way we divide these two forces even more. As they divide, they cause the ageing processes to hasten and the formation of the acquired nature (sometimes called the ego) is sped up. Realisation is pulled even further away from us as our mundane thoughts and conditioned thinking overtakes us. The ‘tool’ of the mind has become the master of consciousness and thus elevation of spirit is denied to us. The separation of Fire and Water is shown below: 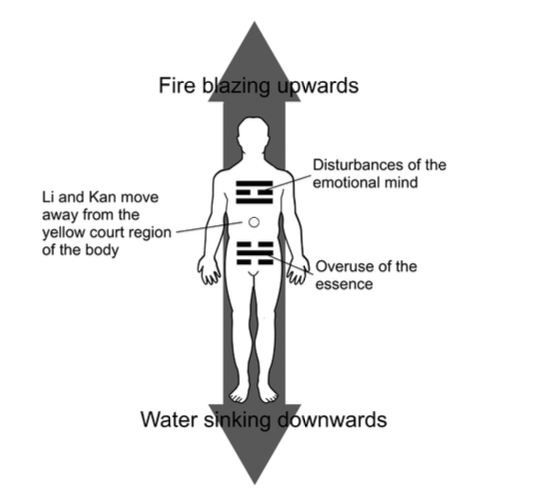 The Separation of Fire and Water

In order to change this, through alchemy we must mix the energies of Fire and Water which meet halfway at a location within the body known as the Yellow court. If we are to get the two to meet with each other we must locate the Dragon and Tiger and cause them to copulate. Alchemical language like this can be confusing at first, especially when it is also multi-layered but let us see if we can take this apart so that it makes sense.

Firstly, the copulation of the Dragon and the Tiger means different things on different levels. On the level of Jing (physicality) it can actually refer to sexual practices known as dual-cultivation practices. The male is the Dragon and the female is the Tiger. Specific tantric and energetic practices enable these two to combine their energies and so mix the Fire and Water essences with each other through physical union. This would be considered the lowest level manifestation of Dragon and Tiger energies mixing and generally only used within Daoist sects to form a foundation of good health within the physical level of the body. The second level of Dragon and Tiger mixing refers to the energies of the Liver and the Lungs which can interact with each other on the Qi (energy body) level. This would take place within some forms of Qi Gong exercise. The third level can refer to the mixing of the spiritual energies of the pineal and pituitary glands which will produce a fluid which moves through the body restoring health to many of the body’s tissues. This is probably the least used definition of the Dragon and Tiger terminology to be honest and mainly understood in this way within more esoteric Daoist sects concerned with attaining physical rather than spiritual immortality. The final (and most relevant to alchemical meditation practices) is the meeting of the Yin line within the Li trigram with the Yang line within the Kan trigram. As this happens it is said that the positions of Dragon and Tiger have become reversed.

By subtracting the Yin line from the centre of the Li trigram we have found the Dragon. This can only be stirred by finding true stillness in the Heart-Mind through prolonged and diligent sitting practice. This will cause the Yin line to sink downwards as ‘to sink’ is the true nature of Yin. In the early stages of the practice this will enable the Fire energy of the Heart to stabilize and stop rising as it is now anchored into the body by the Yin ‘Dragon’ line. In the same way we must stimulate the Yang ‘Tiger’ line of the Kidneys to movement which will cause it to rise. This lifts the Kan ‘Water’ energy preventing it from sinking as before. Now the ageing process is slowed and the early stages of alchemy have been entered into.

If we can do this for long enough and effectively enough we will cause the two centre lines to meet within the Yellow court. This will result in the two lines ‘copulating’ which reverses the centre lines of Kan and Li. The result is the formation of the Qian and Kun trigrams which are pure Yang (three solid lines) and pure Yin (three broken lines). Now Fire and Water will be gone and alchemically Heaven and Earth have been produced instead. This brings harmony to the body which will in turn lead a practitioner towards true stillness, the emergence of the congenital nature (consciousness) and the dissolution of the acquired mind.

All of this is the precursor to ending the movement of the breath, mind and spirit to generate the three congenital treasures, the key ingredients which form the alchemical agent; the mystical elixir of Daoism