Nei Gong is the Art of Inner-Cultivation. Development of the Body, Energy System and Mind

As a term, Nei Gong can be translated as meaning ‘internal skill’ or ‘internal development’. It is a practice of inner cultivation that originated within the wisdom traditions of China. Having its roots in Daoism and alchemical training, Nei Gong has also been absorbed by Chinese Buddhist traditions as well as being conveyed to many parts of South East Asia where the practice mixed with the local cultural traditions. Damo has studied primarily within the Daoist Nei Gong lines but is also initiated into a Buddhist Nei Gong school as well as having extensively explored the South East Asian interpretations of the practice as well.

Nei Gong is the systematic process of developing the three core ‘body’s of man’ so that they function at their most efficient level according to the teachings of the ancient Chinese arts. Focus begins upon cultivating the physical body so that it may serve as a vessel for energetic practice. From here, it progresses onto practice with the energetic matrix of the subtle body and then further again into evolution of the mind’s capabilities. To the Chinese, they knew this as the three step process of: Jing Gong, Qi Gong and then Shen Gong.

The core of the practice involves development of the main storage centre of the body which is known as the lower Dan Tian. This centre is developed to such a state that we can return the body’s energetic functioning to an earlier stage of being vibrant, powerful and active. This is the first step towards ‘returning to Spring’ as it is known in Daoism. When the Dan Tian is in place, attention is turned to the channels that are regulated and harmonised so that Qi may flow and conduct to all of the correct regions of the body. This process is mainly carried out through development of two main types of energy which are known simply as ‘Yin Qi’ and Yang Qi’. rather than being abstract terms, these are very specific tangible ‘substances’ which may be cultivated and refined if we are privy to the methods involved. 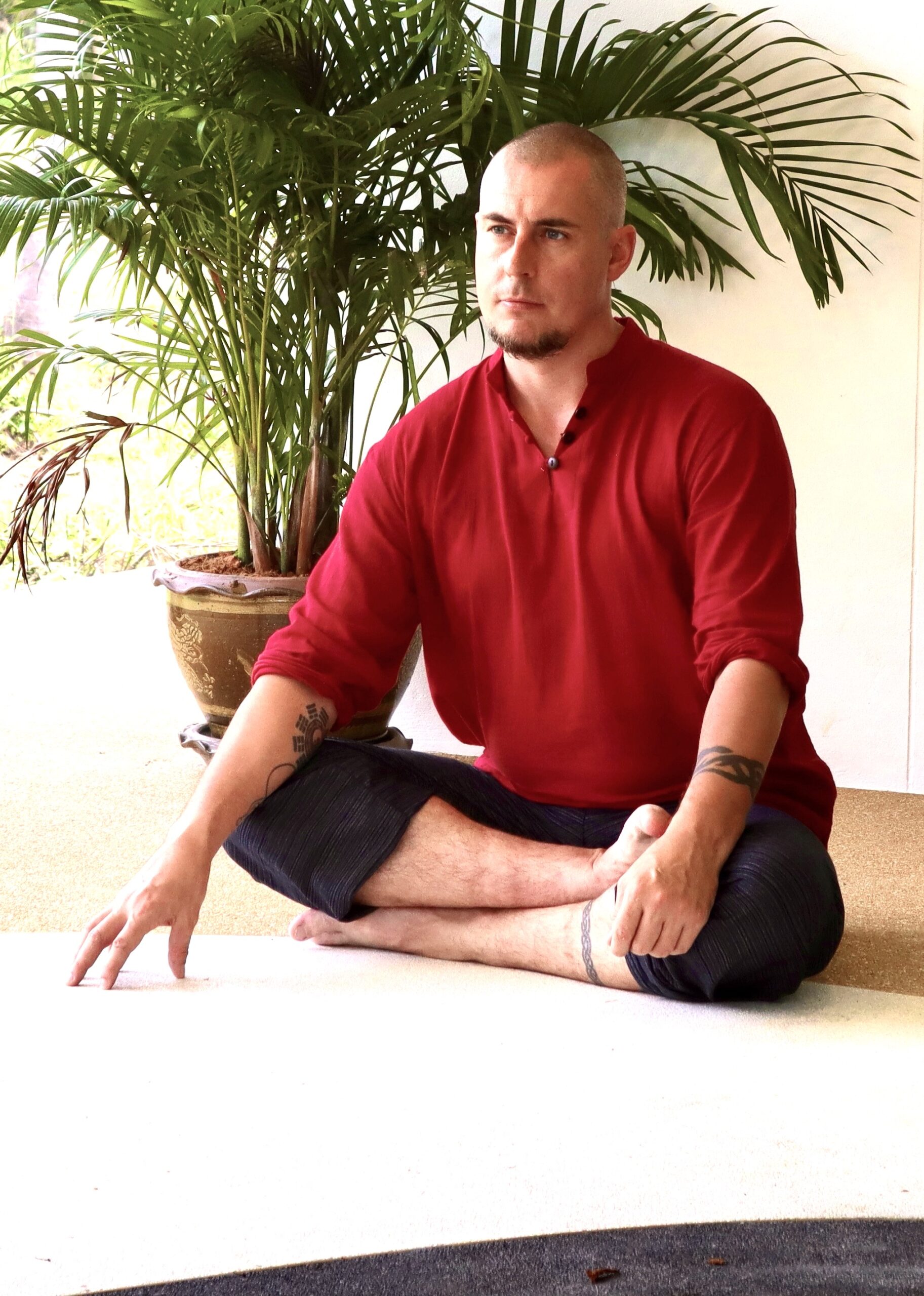 Within Chinese philosophical or medical teachings, the terms Yin and Yang are often abstract and comparitive terms. Within Nei Gong practice, this is not the case and instead, Yin and Yang refer to two types of Qi that should be developed through practice. We can think of Yin and Yang Qi as having the following properties:

In practice, Yin Qi manifest as a bio-magnetic energy that develops in various fields throughout the body. The first field to be focused upon is the organising field of the lower abdomen and this, essentially, becomes the outer container for the lower Dan Tian. Yang Qi is an electrical energy that initially flows within the nervous system. The organising field of Yin begins to guide the energy of Yang and so, in this way, energy is led into the lower Dan Tian and so we learn to ‘recharge the body’s battery’.

This process of developing and mastering Yin and Yang Qi was long the foundation of the classical alchemical arts and yet, sadly, the methods of Dan Tian development are often sorely misunderstood. Far from being an imaginary process which is undertaken through visualisation and woolly methods, Dan Tian development is an exact inner-science which takes systematic training to understand. 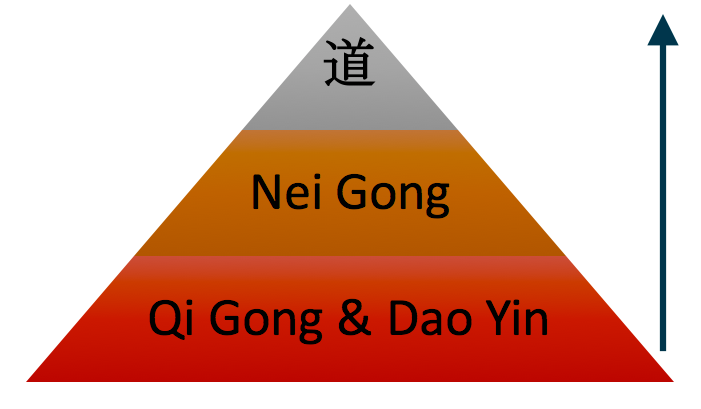 The process unfolds in a systematic manner. Qi Gong and Dao Yin exercises are used to develop the body. Nei Gong is then used to awaken and develop the energetic system and then these platforms are used to then lead a persons mind towards union with Dao (道).

Along this journey, energy is developed, channels are opened and a deep inner-healing process is entered into. Nei Gong training is one of the most beneficial processes that a person may engage with and the key to taking yourself deep into the esoteric arts of ancient China.

Within the Lotus Nei Gong School, we use Nei Gong to develop the health and inner-vitality of students. beyond this, alchemical training is built upon this solid foundation.

In the video to the right, Damo gives a brief introduction to the Nei Gong process and Nei Gong training. Nei Gong is taught on various courses and classes around the world by Damo and his seniors. It is also taught through the Internal Arts Academy which can be found at: www.damomitchell.com

Damo has also written a number of books on the subject which can be found elsewhere on this site.

There are three key phrases within Nei Gong society that summarise exactly what we need to do in order to fill the lower Dan Tian with Qi. If we can understand the energetic mechanics behind these phrases, then it is possible to understand how Qi is built up within the lower Dan Tian. These three phrases are:

Initially, when the Qi needs to be led towards the lower Dan Tian, we need to bring our awareness down to the lower abdomen. In actual fact, you don’t need to be all that exact. Bring your mind down to the lower abdominal cavity and you will find that the Qi begins to move. Here is the key, though: do not ‘lead’ the Qi with intention; the creation of a mental action in this way will cause the Yang Qi to begin dispersing. Yang Qi is ‘fragile’ in a way; though it has been built in the Huang of the body, it is quick to disperse. Instead of ‘leading’ the Qi with intent, simply lower the mind down towards the abdomen. Let is sink under its own ‘weight’. The Yang Qi will then be naturally led towards the abdominal cavity with minimal force being used. In this way, the passive action of ‘sinking’ the mind will be all the effort you require. The result of this will be that the vibrating sensation of the Yang Qi will begin to sink through the body towards your abdomen along with your mind. 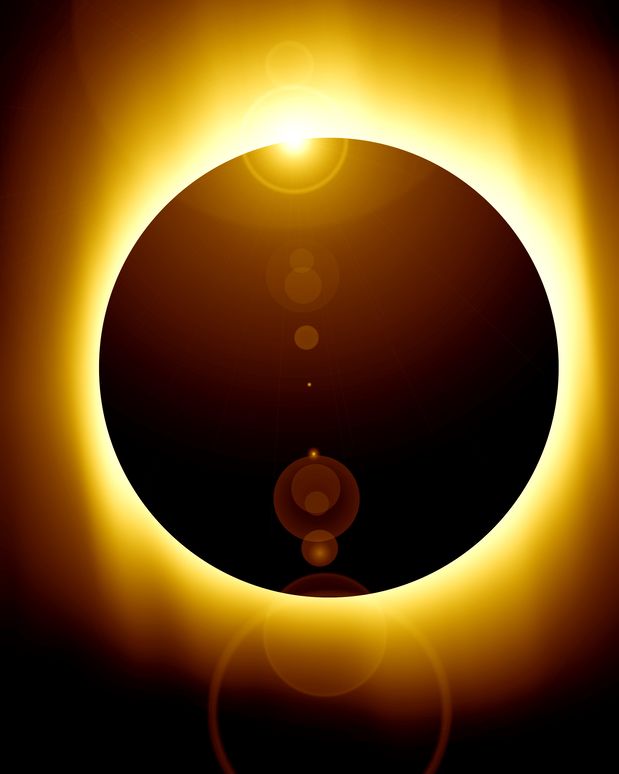 This is where the skill now comes in; by moving your mind within the body, it will have e tendency to start generating thought. Do not allow this to happen. This is why it is said that the Yi needs to be ‘shou’ or ‘guarded’. The mind needs guarding from invasion by thoughts and mental action. Excessive thinking will disturb the Yang Qi and use it up; guard your mind, keep the senses sealed and maintain the relative stillness and stability of your awareness. 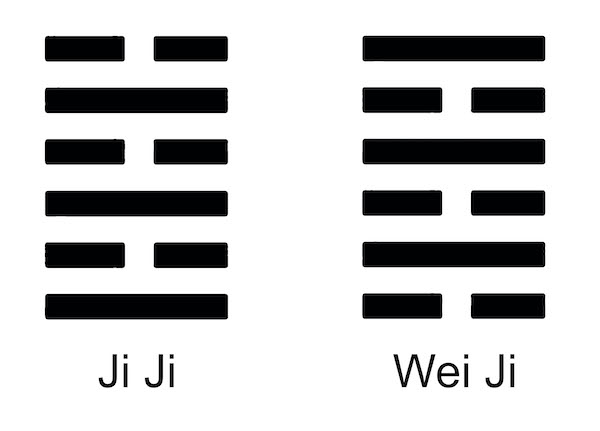 Ji Ji shows Fire submerged within Water and is so-named ‘after completion’. The Yang Qi has been submerged within the Yin Qi field, and so our work is done with regards to the relationship between the two. Wei Ji shows Fire and Water before this process takes place and is named ‘before completion’. In this second symbol, the Fire has not yet been submerged and so they still need work. In this instance, the symbols for Fire and Water are used instead of Heaven and Earth (pure Yang and Yin) since our Qi is in an acquired state of being; it is distorted by our acquired mind and mundane thinking. 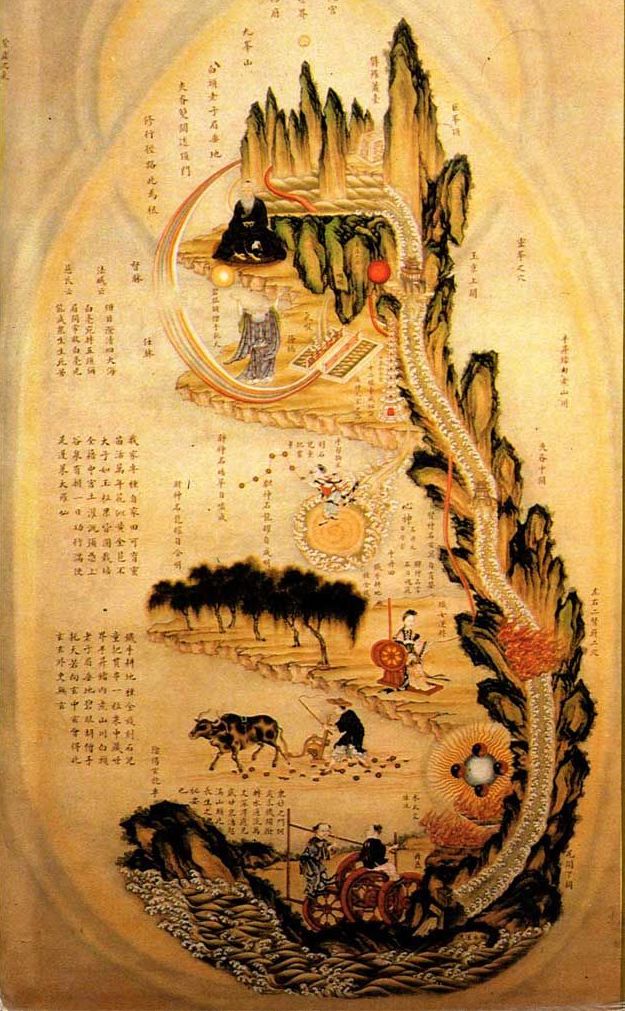 This is where the character of ‘Xi’ comes in. This can be translated as meaning ‘to inhale’, but it also means ‘to suck’ (a literal breakdown of the character shows the action of ‘grabbing’ through the mouth).

It should be noted here that the alternative phrase of Dan Tian Hu Xi (丹田呼吸) is sometimes used in place of Dan Tian Xi Qi. Dan Tian Hu Xi literally means ‘Dan Tian breathing’. Many have mistakenly believed this phrase referred to some kind of Qi Gong exercise whereby the Dan Tian expanded and contracted or something similar, but this is an error in understanding. The Dan Tian ‘breathes’ the Yang Qi in and out through the action of Yin ‘inhaling’ Yang towards its core. This is a manifestation of many of the alchemical directions of ‘immersing Fire in Water’, a common phrase within Daoist classics that has meaning on many levels. In the case of Qi Gong and Nei Gong, this is what it refers to. In the case of consciousness, there are further meanings for Fire and Water.

The video to the right gives a detailed breakdown of the classical Nei Jing Tu chart. This chart breaks down a great deal of the internal arts process as taught within the Northern Daoist alchemical traditions.

It is a chart that originates early back in Daoist history but a final carved version was engraved into the wall of the White Cloud Temple (白雲觀) in Beijing in 1886. It shows a conceptualised model of the human body along withe various energetic components required for both Nei Gong and alchemical training. All sincere students of Daoism in China study this chart closely.