“Damo’s travels have taken him across Europe and Asia in search of authentic masters of the arts. There have been many dead-ends and false promises along the way, but this has all been a part of the journey. Now, he shares teachings from within the authentic lineages that he encountered on his journey.”

The map to the right shows the areas of Asia where Damo has studied within various Eastern traditions. Over many years, he has travelled to and explored many other parts of China and South East Asia but the pins in the map show the places where he met and studied with authentic masters of the arts. For every authentic connection made, several dead-ends were travelled; it has been a long and complex search to this point!

China provided the true root of Damo’s practice. In the North of China, in Shandong province, he studied the internal martial arts and these practices were continued in various other regions of China, in schools, on mountains and in temple courtyards.

It was also here, in China, that Damo was initiated into the Daoist alchemical sects that becamse the mainstay of both his teachings and studies for many years. Lotus Nei Gong was born out of the traditions of China and here is the pillar of what students within the school study. 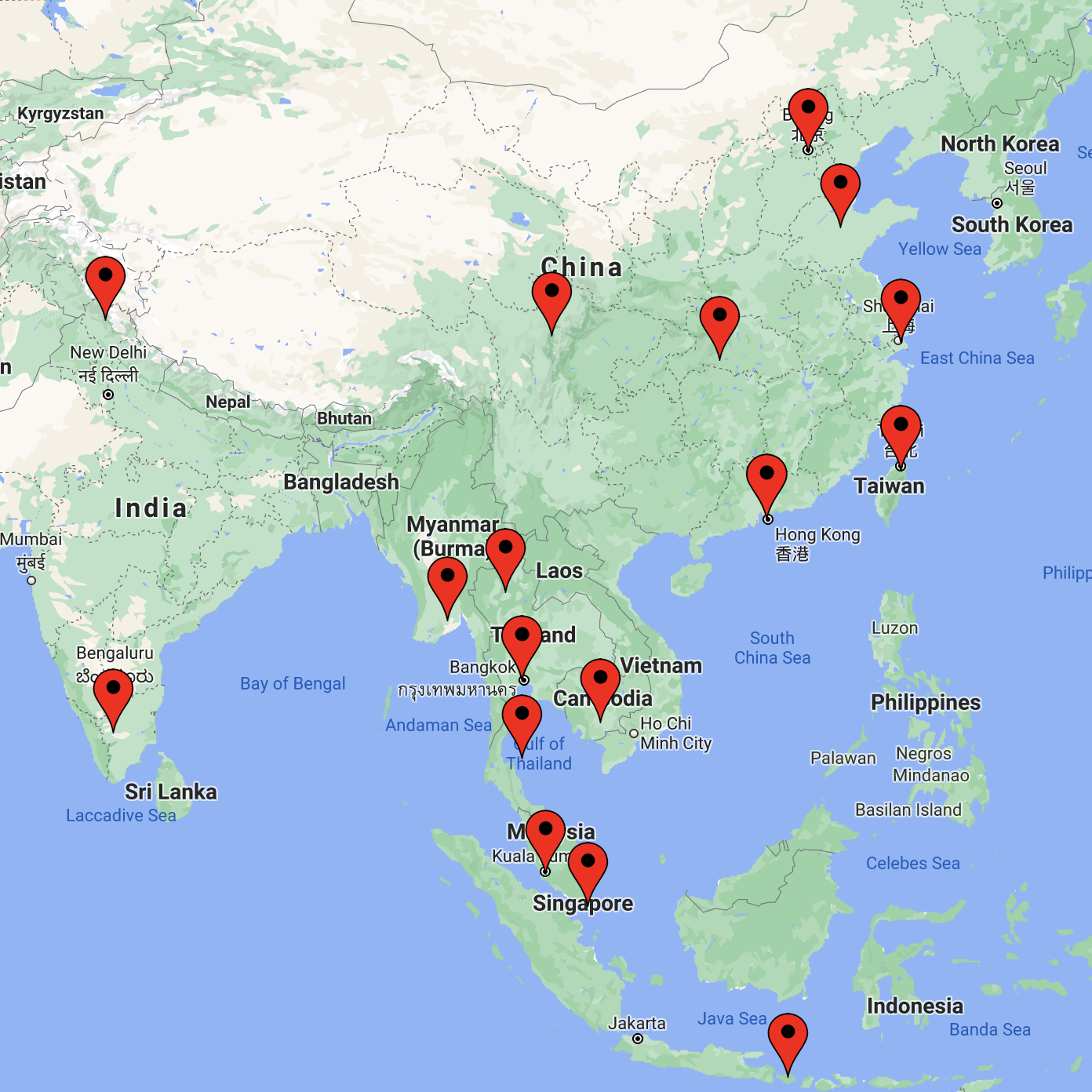 Over the years, Damo actually travelled to most of China’s provinces in search of teachers and lost lineages. Many threads were followed and few were found to be fruitful.

Daoism in China tends to be divided into three main categories – religious Daoism, philosophical Daoism and, finally, Daoism from within the alchemical tradition. Modern scholars argue over whether such a distinction between the three traditions ever originally existed but the argument is somewhat irrelevant because these days, this distinction is certainly there to see.

Religious Daoism is very ritual-based with ceremonies and religious holidays, a whole pantheon of gods and deities are there to be worshipped and the adherents of the tradition have adopted the hierarchal model of monks, priests and so on. The majority of Daoist practice that you will encounter in China is from within this branch of Daoism and it is certainly the model of practice that you will encounter within the various temples and monasteries that are dotted across China and other parts of Asia.

Philosophical Daoism is a kind of theoretical ‘folk’ tradition that is passed down into Chinese society. There are numerous ways in which this form of Daoism may manifest including as superstitions, folk-medicines, traditional teachings and through arts such as Feng Shui or interpretation of the Yi Jing.

The final major form of Daoism is alchemical Daoism from which practices such as Nei Gong and Qi Gong are also derived. Though there may often be crossovers between the two, alchemical Daoism is distinct from religious Daoism as it pays little heed to the idea of deities or organisational hierarchies and instead focus upon the pragmatic conversion of chemical, energetic and spiritual substances within the human mind/body system in order to lead a person towards liberation from the cycle of rebirth.

Though there were periods of time spent within both religious and philosophical Daoism, the majority of Damo’s learning has been within the alchemical traditions with the attraction to this line of Daoism being the no-nonsense, practical approach to internal development.

China went through a historically difficult time during the cultural revolution of the late 60’s and early 70’s. During this time, a great many of China’s cultural arts were eradicated. The martial, medical and spiritual arts were no exception and entire lineages were all but wiped out during this time.

Two parts of Asia that were spared from the damage of the cultural revolution were Taiwan and Hong Kong. For this reason, a number of the internal arts such as Taiji and Bagua were preserved very well in these parts of Asia. Daoism also survived very well along with practices such as Feng Shui, classical forms of medicine and more. There were some down-sides to how these lineages survived though, as the traditions were able to move to the protection of Taiwan and Hong Kong but, at the same time, they were separated from their Chinese source and tradition heads. Damo’s experience was that the arts were given space to thrive in these places but, at the same time, were not held to the rigorous standards of supervision that they would have been in China and so they had taken some unusually distorted paths.

The arts and teachings of Taiwanese teachers and from the schools in Hong Kong were vital in assisting Damo with piecing together some of the lost internal mechanics from within the arts he had studied in China.

There were two main areas of study for Damo in South East Asia: The first of these was Buddhism from within the Theravada and Mahayana lines. The second was the internal art of Nei Gong which (in general) had been preserved to a higher degree in South East Asia than in its country of origin, China.

Damo spent many years using Thailand has his home base. Here, he studied in temples and monasteries, staying for protracted periods of time within Buddhist communities as well as continuing his studies of the martial arts in other parts of the country.

In Malaysia, Bali and other parts of Asia, the arts of Nei Gong and Qi Gong were being practiced to a very high degree and so Damo continues to travel through these regions of the world and continue his studies in the healing and spiritual arts. In this part of the world, the esoteric and the mundane meet one another so that the bridge between the possible and the super-normal may be crossed by those who delve deep enough into depths of the arts.

The tradition of Chinese Chan is also well-preserved in places such as Malaysia and so a great deal of effort has been spent unearthing authentic masters of ‘mind’ in the jungles and cities of this country.

“Daoism, Hinduism and Buddhism are the great spiritual traditions of the East. Though they may differ in their approach, where they meet, is the gateway to the miraculous.” 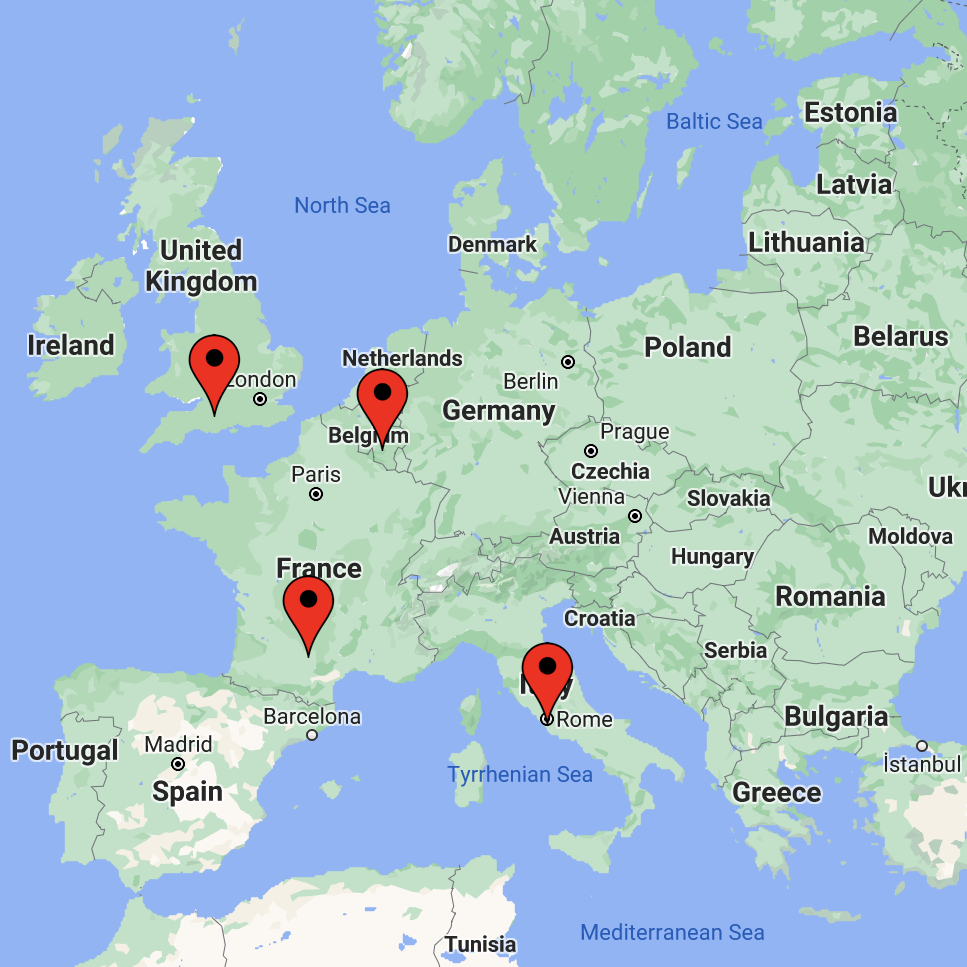 Damo’s study began in the UK where he spent his younger years. Mostly focused upon martial arts and Qi Gong, his early years of practice involved travel up and down the UK to various teachers and then further afield into other parts of Europe to meet masters of the arts and attend many seminars.

At one stage, Damo was spending every evening of the week in a different martial arts class and then travelling to seminars and workshops at the weekends. He was basically living and breathing his practice and, after some years of this, he reached a stage in his life where he was able to go further afield and this is when he first set out into Asia in search of his own enlightenment experience.

These days, Damo is based between Southern Portugal in the Algarve region and South East Asia. When not teachings his well-attended events in Europe and America, he continues to study with his main teachers as well as following leads to explore lost lines of practice.

Damo shares his teachings through the Lotus Nei Gong School and online through the Internal Arts Academy.